Konrad Aden receives the Young Investigator Award for his research on the influence of the metabolism of intestinal bacteria on the effectiveness of antibody therapies.

The Martin-Gülzow-Prize is awarded by the German Society for Gastroenterology, Digestion and Metabolic Diseases (DGVS) to young scientists for fundamental or trend-setting work in the field of clinical gastroenterology and is endowed with 5,000 Euros. This year, the award is presented to PD Dr. Konrad Aden, who is Senior Clinician Scientist of the Cluster of Excellence “Precision Medicine in Chronic Inflammation” (PMI) both as a researcher at the Institute of Clinical Molecular Biology (IKMB) at the Kiel University (CAU) and as Senior Physician in the Clinic for Internal Medicine I at the UKSH, Campus Kiel. Aden receives this award for his research on the influence of the metabolism of bacteria living in the intestine on the efficacy of antibody therapies in patients with chronic inflammatory bowel disease.

Modern therapeutic approaches for chronic inflammatory bowel diseases are often based on antibodies that specifically bind and thus block messenger substances of inflammation, such as the so-called TNFa. However, these antibody therapies are only effective in some patients. For this reason, scientists in the PMI Excellence Cluster are looking for biomarkers, i.e. measurable molecular indicators, which doctors can use to assess whether a particular antibody therapy would be successful or not even before starting the therapy.

“We were able to show that the intestinal microbiome, i.e. the totality of microorganisms living in the intestine, produces certain metabolic products that we can use as biomarkers,” explains Aden, who heads the junior research group “Immune metabolism of intestinal inflammation” at the IKMB. “Using these metabolites, it is possible to estimate even before therapy begins whether or not antibody therapy will be successful in this person with this microbiome,” Aden continues. In their work, Aden and his colleagues were able to show that patients in whom antibody therapy successfully reduces inflammation have a completely different metabolism in the microbiome before therapy begins than patients in whom the therapy does not work. For example, the intestinal bacteria produce more so-called short-chain fatty acids in those patients who later respond to the therapy. These exert a protective effect on intestinal cells, as has been known for some time. Aden, together with other cluster members, published the observations in the renowned journal Gastroenterology in 2019. 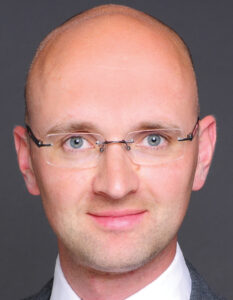